Cityscape in the afternoon _ Photo by Royal Hopper

Painting the Desert Green and Chutzpah comes to the City

It’s not just beer. It is AMAZING BEER _ Photo by Royal Hopper

There is an old joke about the Irish that seems to fit the fans of the Glasgow Celtics FC that starts with a question.
How many Celtics does it take to drink 50 kegs of beer? I will give the answer at the end of this week’s blog.

Sometimes you have to admire the Chutzpah of the people you meet and see in the City of Sin even if you don’t want to know the details.

You have to admire the Chutzpah of a guy who gets run out of a casino because he’s living on the sidewalk, smells like dirty socks and can’t pay for the drink he ordered, waits five minutes and then comes back in and goes to the other side of a bar and orders another drink from the bartender working that side of the bar.
He probably should have waited  a day or two but you gotta admire the nerve. I’m just saying….and to the gray haired gentleman who was seen on Las Vegas Boulevard wearing a pair of white kitty cat ears …man ..I’m just saying ….that is Chutzpah and man I really don’t want to know the details so keep them and your ears to yourself. 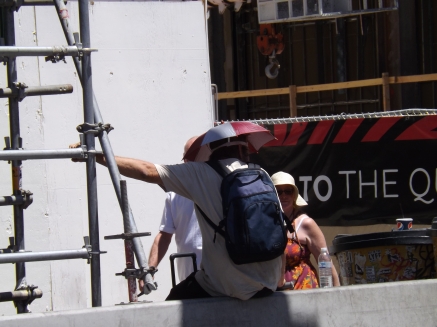 You got me dude _ Photo by Royal Hopper

You gotta admire the Chutzpah of people so pale they glow in the dark who walk around in the desert sun with no shirt on you just gotta.

If you walked by or into a Las Vegas casino or swimming pool this week and got blinded by a flash of sunlight off a shirtless mound of pale white flesh wearing sunglasses or a giant doll with orange hair walking stiffly next to a pair of Sailor Moon lookalikes.

No, your not in a zombie apocalypse, you didn’t drink the wrong glass of juice at the rave and no the cast of Twilight is not filming a sequel in Les Vegas.
The beer drinking, pale faced fans of the Glasgow, Scotland soccer team called the Celtics invaded the City of Sin this week followed closely by Comic Book and Anime fans in full regalia.
“Oh Danny Boy,” that’s what a lot of the Irish, Scottish and Welsh, Canadian and Louisianan fans of this 120-year-old soccer team sang in groups while hanging around swimming pools and bars ( Yes I said soccer not football. I’m American sue me or don’t because Im freakin broke) . It was either Oh Danny Boy they were singing or Old Denny’s Toy, or So done the bar, or maybe Flo Fanny Koi..It’s hard to tell through the accents and green beer and the disco blaring from nearby PAs.

This team has followers across every corner of the world  including Canada and Louisiana and every two years through rain and sleet and gallons and gallons of beer they trek to the City of Sin to bake their pale skins in the desert sun, sing drinking songs and trade stories with people who mostly cannot understand a word they are saying. They are good people and for the most part Happy Drunks which as always a good thing in a City dedicated to decadence, drinking and dude ranches (Okay so my alliteration is a little rusty)

Now to the question of the week….

How many Celtics does it take to finish 50 kegs of beer? The answer is yes !!!!!

Ohhhh well it was funny when I thought of it. People still sell water on the strip..pose for pictures dressed like Elvis, drag their kids the worlds largest Coca-Cola store and sometimes sing Irish drinking songs on the sidewalk.
That’s life in the City of Sin boys and girls
Rock on Sinners
And Stay cool