Telling it All in the City of Sin

Taking advantage of the shade a Sin City resident scans his cell while cooling off in the shadows….Royal

This week a couple from the great bland state Minnesota made a great confession to me while we traded stories about the excesses this city inspires in its visitors. I told them about the man who crawled into a strangers bed in the wrong hotel because he was so drunk and the one who sold his plane ticket to play one last shot at winning the big jackpot or the man who convinced himself he was Elvis and spent part of a week dancing on the sidewalks of Las Vegas saying thank you very much or the one who went skateboarding in his boxers playing chicken with tour busses….

I told them about the inebriated man in his towel.
Earlier in the week an Irish gentleman demonstrated the more traditional type of hedonism by walking around a casino full of patrons in nothing but a towel. 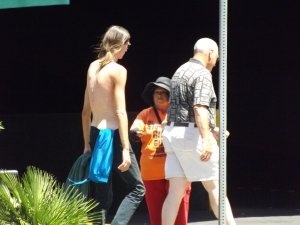 As shocking as it was to see an inebriated Irishman walking around a Las Vegas casino lost with nothing on but a towel and a colorful thong I have to say the gentleman was pleasant and polite. Even though I did not understand a word he said  (Hey Im from Texas I barely speak English ) He was finally pointed in the right direction and deposited in a room full of half naked older men wearing ascots and gym shorts ..( I don’t judge. Seriously I dont …judge…. I mean it ) Three guys in their 60s half dressed bottle of liquor everywhere, hugging and other stuff..I don’t judge…seriously… I don’t judge.

I told this cute Minnesota pair about the dirty, scraggily wayward man I saw on a Las Vegas road with his hands open cupped together to accept donations. The man was so beaten down that apparently holding a cup was to much for him.

A cowboy saunters across a Sin City intersection unbuttoning his shirt in response to the heat….

Looking like death warmed over or a freshly dead  bad B-movie zombie with his greasy leather like skin and beard so dirty it didn’t look real this man simply waited for cars to stop at a traffic light cupped his hands in hope and walked between two rows of tired after work commuters hoping for a handout that would get him out of the desert heat for a day or two.
He walked in the road without fear muttering a prayer that was suspiciously similar in cadence to an old Dr. Pepper commercial, slouching away only when the light turned green. He stopped just before the cars left the intersection somehow confidence the commuters wouldn’t risk their shiny car running over a greasy, weather worn dirt encrusted ner do well like him..and not surprisingly they didn’t

The city was also invaded by chess fans this week who were in town for a big a chess tournament, they nerdiest bunch of rebels you will ever meet.
“Sir you can’t sleep in the casino ,” ….
“No I can” he said defiantly .
“No you can’t …”
“Oh ..okay..” sulk..sulk ..

It was 108 degrees in the City of Sin this week and it not even officially summer yet. Down the boulevard a man wanders the sidewalk with a three feet wide sun hat, gym shorts and pink shoes, a woman pushes her poodle in a baby carriage and tourists the color of pink lobsters clutching souvenir drinks four feet tall walk past an MTV logo with legs, two Elvi four cartoon characters and a wheelchair driving couple honking their horns as they weave in and out of pedestrians on their way to the burger joint down the street.