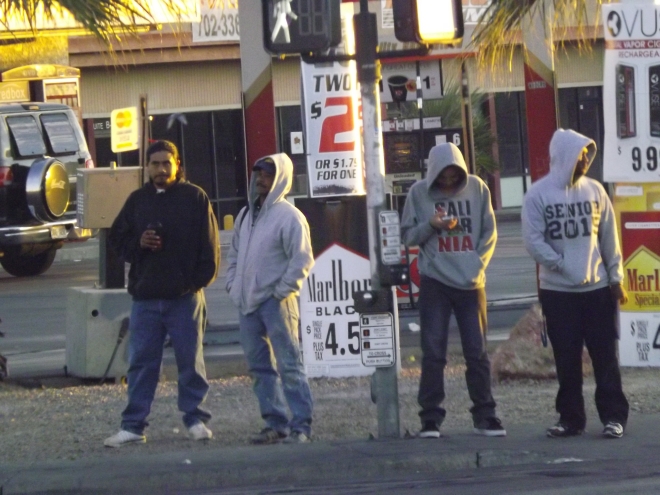 Disco Dancing in the City of Sin

Disco is apparently making a come back on the sidewalks of the City of Sin. Say it isn’t so sinners, say it isn’t so. Or should I break out the old leisure suits, platforms and bright rayon print button ups . .. . . . Should I ???? 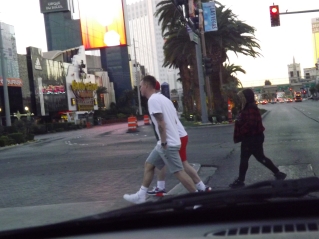 Crossing the street in the City of Sin – Photo by Royal

It is a rare day in the City of Sin, cold muggy and miserable, coats that haven’t been worn in months are dusted off and wrapped around freezing bodies and heaters that smell like burning mold and dust and turned on after months of disuse.

One gentleman ( lets call him Disco Bob) sporting a Mohawk and a tightly trimmed “kiss my ass” goatee, a spring polo and a pair of light cotton slacks better suited to April than November seems oblivious to the winter cold as he bebops down the boulevard skipping and strutting to variety of 70s dance tunes known collectively as Disco and the plaintive balladeers of that movement the infamous BeeGees.

This modern day polo wearing Disco Viking strides boldly down Las Vegas Boulevard toward a lonely bus stop were three Sin City commuters are waiting for the bus bouncing to the beat of the 70s dance music blaring from one of the strips more ancient casinos nearby as the Bee Gees plaintive dance ballads proclaiming Stayin’ Alive is good and glory to all leisure suits.

Disco Bob saunters up to a Sin City bus stop sauntering up in disco dance mode to the crowd huddled together behind the perforated metal of the bus stop bench and stopping in front of the small crowd as the soft superficial sounds of disco Divo ( the male version of Diva) Andy Gibb’s disco classic “Shadow Dancing” fills the chilled desert night. 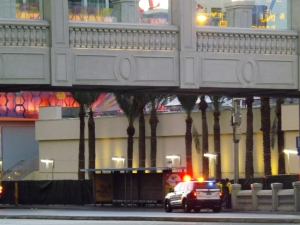 Disco Bob begins bobbing his head doing his best Andy Gibb imitation as he breaks into a passionate solo version of the LA Hustle and soon is shaking his bootie for the three strangers ( or perhaps horrified family members) look on with mystified abhorrence.

Finally the song draws to an end as the bus pulls up to the stop and suddenly Disco Bob and his audience are gone perhaps having fled to safer areas of Sin City away from disco dancing public transit commuters or perhaps to get their inebriated family member somewhere away from the Bee Gees, Andy Gibb and the other evil temptations of the city without a conscious or taste.

What does it mean ?? I don’t have the foggiest idea. Las Vegas is a city full of people who come to be noticed and usually end up being just another face in the Disco themed crowd. 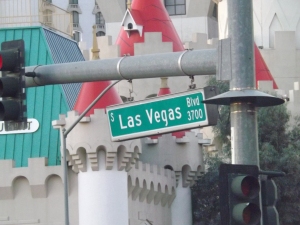 self explanatory ..Vegas is a weird combination of Disney Land and a New Orleans riverboat _ Photo by Royal

A man stands on his balcony half dressed and shouts woo hoo, another man displays his assets for all to see, in another a tough guy stares on in amazement as a wandering beggar steals a sip of diet coke from the cup on his table and working girl named Sue walks out the door with a man’s wallet in her hand. . . 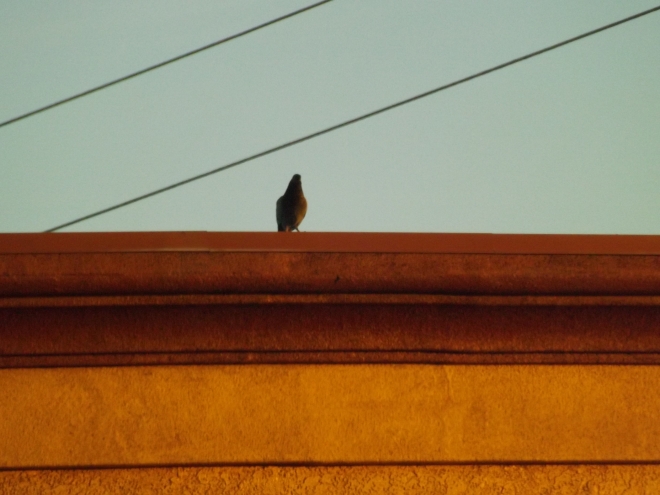 Because it is Cool – Photo by Royal 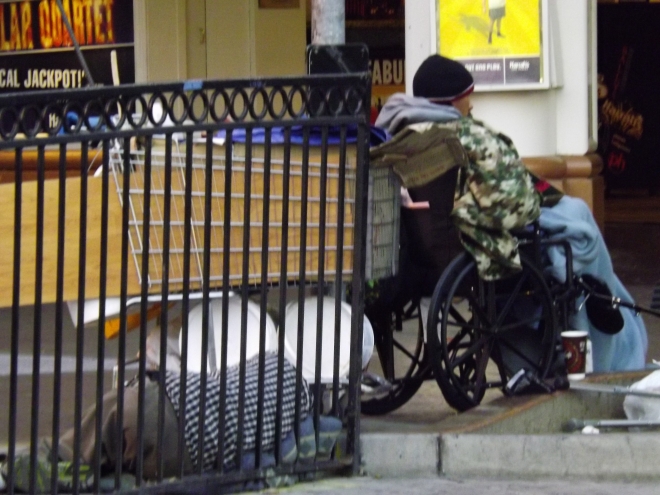 Hanging out on the strip _ Royal Hopper

Every week people leave money and luggage and valuables lying in plain sight while they use the restroom or eat lunch or have their forth $2 shot of whiskey and are surprised when it is gone when they get back and are offended when the casino full of thousands of drunken gamblers somehow does not shut down it outrage. Every year working men and women vote republican. I don’t get it..

A man in a white T-shirt stumbles unsteadily into traffic on Las Vegas Boulevard looking both ways as he reaches the middle of the northbound lane and stumbles drunkenly to a stop. The man,  lets call him DDJ (Dumbass Drunk Jaywalker) appears to suddenly realize ..that he is in the middle of the road .he is in Las Vegas,  there is a car coming from both directions and a fence across the road he is trying to cross.

Jaywalking in Sin City is a lot like running through pack of hungry dogs with a bucket of chicken strapped to your chest or betting your rent money on a hard eight. It is risky and kind of stupid.

Perhaps for the same reason people visit this wonderfully dysfunctional city time and time again after it has repeated smacked them on the nose like misbehaving poodle caught drinking from the toilet is people who are here do the same bizarre things over and over again.

No matter how many times they are told someone always ends up missing their wallet after a rendezvous with a chick they met in a bar ten minutes before..who told them to taker a shower or have a taste of their spiked fizzy grape juice before the rendezvous.
“She seemed like a nice girl,” said so many older guys who for ten minutes seem to always believe the beautiful young girl offering to sleep with them for rent money was somehow not a hooker and would never dream of stealing their stuff while they were unconscious or in the shower.

Every week people leave money and luggage and valuables lying in plain sight while they use the restroom or eat lunch or have their forth $2 shot of whiskey and are surprised when it is gone when they get back and are offended when the casino full of thousands of drunken gamblers somehow does not shut down it outrage. Every year working men and women vote republican. I don’t get it.. 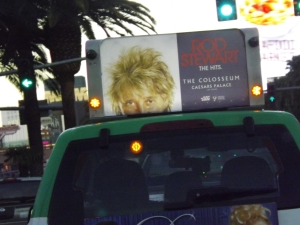 Jaywalking in the City of Sin is a little like that. It is always a little silly in any major city and especially stupid in Las Vegas. Chances are some drunken idiot is going to spot you jaywalking and speed up or maybe he will not spot you until he is ten miles down the road and notices his beat up Toyota is pulling to the left for some reason.
“Oh look there is a tourist under my bumper. How did that happen?”

Every year several people are run over while crossing the street in other words while jaywalking>>> but every night on my way to work I see drunken or impatient or naïve tourists and locals alike jogging across a busy Sin City intersection in a haphazard pattern oblivious to the proximity of their likely demise.

What about our above Jaywalker who dashed into traffic with a traffic light controlled cross walk just 30 years down the road. Fortunately this idiot it was a slow night in the City of Sin. He dashed forward into the intersection, stopped just short of running into the tall metal fence that divided the boulevard in that section of the City. Perhaps realizing his mistake he 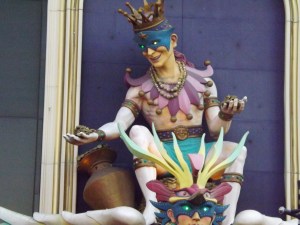 King of Drama and Comedy and Lord of Decadence, Master of the Mardis Gras. Fred I think is his name _ Royal

stumbled and turned on a dime and dashed into the cross walk where he should have been in the first place and where the light was just staring to turn to protect pedestrians crossing the street. Two heavy commuters cars sped through the intersection and the one that was bearing down on him stopped for the light and the Jaywalker jogged lightly across the street saving a good 20 seconds or so in his haste and only being struck by traffic two or three times. Hurray for him.. 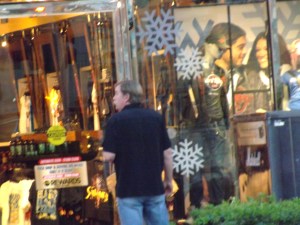 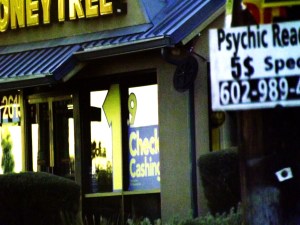 From the woman who had enough of her husbands BS and knocked him nearly out to the Halloween Angel who advertised her services to a crew of angry Dwarfs with her family just out of earshot. . .. . ..to the thief who was seen stealing pieces of Halloween costumes for .work??????? It was a long long week. Here is this weeks Halloween missive. This missive is dedicated to the drug dealer who rented a room with a phony credit card at a local hotel and then filled it with his crack smoking customers… It is dedicated to the host of Goobers from all the benighted parts of the world who shout with indignation when the “nice” girl they met at the bar stole their wallet while they were sleeping off the GHB she slipped in their grape juice. . . . and it is dedicated to the man who replied what costume when he was complimented on his Elvis get up 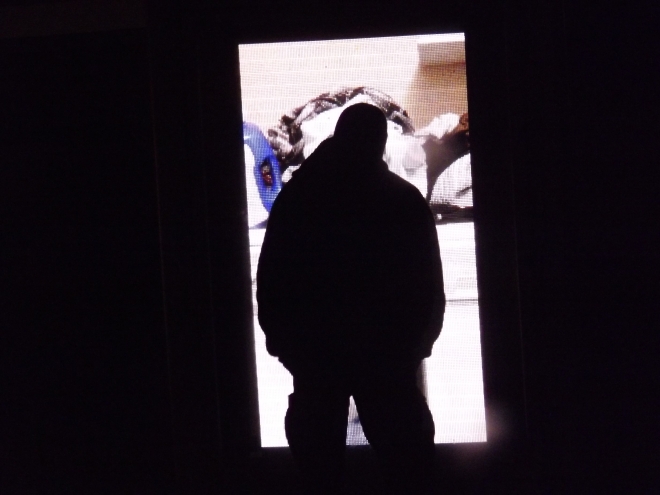 No this is not a ghost in the morning glow. It is a tourists looking at rack full of advertisements for girls named Cherry Pie..Scary stuff huh _ Royal

All Hallows Eve in the City of Sin or Samhaign, slots. Sluts, Sin and Sloe Gin Fizz in the City full of Sinners

Little Bo Peep is dressed in blue too 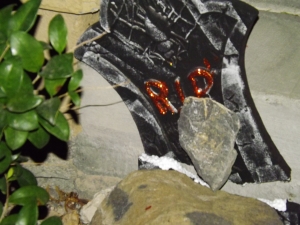 Elvis is passing out flyers on the street

And Wookies dancing nearby are keeping the beat

Its Sin City baby and Halloween too 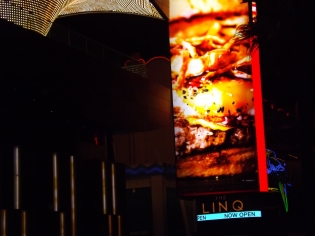 In one corner pirates and another one bats

In one corner witches and a woman called Cat __ flirt

In one corner grandma is throwing a fit

A perverted Darth Vader is lifting her skirt

Two for one the female Darth Vader said in a shout

The crowd jeers and cheers when security hauls her out 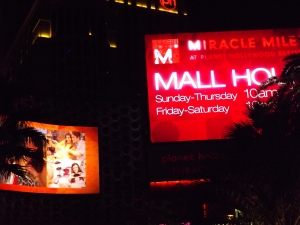 And smiles when grandma gives She-Darth a hit

It is Sin City grandma get over it