A man and his sheets

A man dressed in a black T shirt with a tannish brown jacket wrapped around his waist like a suede kilt from times gone by suddenly stops in his journey down the sidewalk of a Sin City byway that is heavily traveled by casino workers and tourists alike.
He seems to stare at something in the landscaped hedges of the apartment complex he is walking by. Then he bends down stretching like a ballerina and staring at something only he can see and begins to speak.
Perhaps he is speaking to the invisible friend he spied while walking or simply talking to the hedge but whatever it is it has captured his attention. He is oblivious to stares of others on the sidewalk or the commuters staring at him from their cars or perhaps he even likes the staring for the attention it gives him. Satisfied that the invisible friend or the hedge as the case may be has understood what he is saying but whatever he stands up clearly very proud of himself and strides off into whatever world his mind had taken him too……still oblivious to what the world sees in him or doesn’t see …I’m jealous aren’t you …
I’m not sure what this means I just felt I had to tell you about it now onto to this weeks rant….maybe it has something to do with the theme of this weeks rant

There is an old saying about the difference between the wise and the foolish.
It goes something like the Wise are always full of doubts and questions about the world and the direction it is going . They know they dont really know. They know they are making educated guesses about the world and have questions about their guesses.
The foolish are always full of certainity and seldom entertain the whys and hows and questions of fact that keep the wise up at night and fill them with doubts.
I suppose the same can be said of dogs….

I have or rather my family has two dogs a Princess named Reddy and a big lunk named Kuma …
Kuma is nicknamed the Lunk or the Lug because she is a happy go lucky clueless love bug who loves all people and hates all other dogs except Reddy who she seems to love like an adorable stoner big sister. Kuma will walk up to strange children with her tail tucked and beg to be petted. Our Nephews Girl Katie was in town with her traveling show playing at the Smith Center. She came over and Kuma instantly took to her plopping all 90 pounds of her on Katie’s lap until she got her fill of head scratches and belly rubs. When Kuma wants to cuddle she will run across the floor and jump into someone laps and beg for attention her mouth open in that huge mouthed Pit Bull/American Bull Dog smile her tongue which is as big as your face… 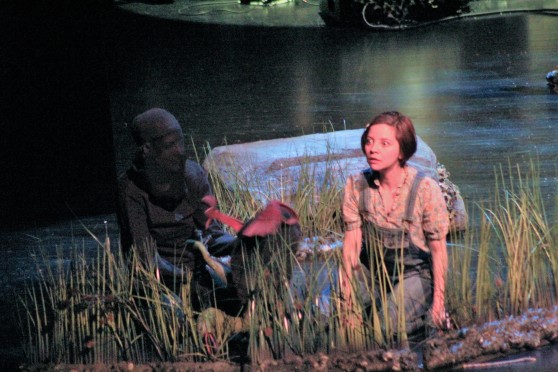 Petra and the Goose at the Pond. A little grainy but it was just to good a shot to let sit

Reddys nick name is Princess Drama Nuerotica because she is so wound up so worried about the outside world we have to give her doggie calm down pills when there is loud noise or activity outside.. We also call her our Goth dog because of the ring of black fur around her eyes and her Goth attitude…She loves her people and no one else. She isnt vicious she just doesnt have any use for strangers. She litterally turns her nose up at strangers because you know shes Princess Reddy
Keep in mind anything will set Reddy off …A moto cross tourney at the Stadium across the street ….the neighbors washing machine turning on during a quiet day. A thunderstorm will make this water hating dog jump into the shower while it is running and we are in it to get away from loud noises . On the other hand she is one the smartest dogs I have ever owned ..Nothing much gets past Princess Drama ..Once she knows somethign she knows it …By dog standards she is smart ..
This begs the question is it better to be a clueless, lovable and cuddle bug who is addicted to hugs like a drug addict Jonesing for meth and never seems to worry about a thing or a Cynical nuerotic Princess who jumps into showers at the sound of thunder but is pretty smart…
Is it better to be smart and worried or stupid and happy
Such is the question in today’s mussing on Life in the City of Sin