There is an old saying that goes something like Vegas is where old acts go to die. There is something about the City of Sin that makes people relive their glory days and sometime makes them believe they are in the glory days. If you pay attention you see it everywhere. Performers made up with inches of make up, gamblers dressed in the clothes of their youth and tourists dancing to tunes that were old when

Van Halen was a hot new So Cal Rock act.

The energy of drama and looking good in desert sun

You see a man walking down the street with a broad brimmed straw hat, head bent down under the glare of the oppressive desert sun _ his colorful black and yellow Hawaiian shirt flapping in the blast furnace summer wind of southern Nevada.
The man’s back is bent perhaps from a lifetime spent on his feet and his cargo rigged shorts haven’t been “In” since 1987 or so. Walking is an effort. He is not homeless or desperate just one of the millions of Sin City denizens. The man, lets call him Hawaiian shirt guy, is tired and worn down. He has seen better days. 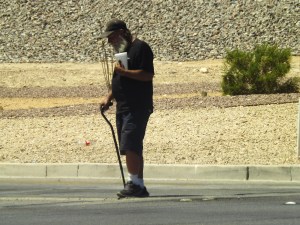 Walking down the road of life. There were better days – Royal Hopper

Most days Sinners (residents of Sin City living her by choice) like me would barely notice a guy like this as we make the daily commute to work but something about him on this oppressive summer day catches the eye of bystanders.

The man stops perhaps suddenly realizing people are watching raises his hand to look at his stylish watch and then looks around confirming that passersby are watching him.

He straightens up with some effort and begins walking picking up his pace as he steps onto a crosswalk at an intersection. You can almost hear the obsolete golden oldie dance tunes playing as Hawaiian shirt guy shaking his head and body to some half remembered tune from his glory days steps up the pace of his dancing walk.

Hawaiian Shirt guy slumps as he realizes the attention he put the show on for is gone. He takes a deep breath stands a little straighter and continues on his way. The brief moment in the sun has energized him. For a moment he is again that man who drew every eye in the room to him when he walked in and the memory has made his day.

Vegas is full of drama queens who live for the attention of their fellow Sinners, those that live vicariously through them and those that serve as the audience. Who just take it all in. Who drink in the sights and sounds of the neon jungle that is Sin City sigh and go to work every day in the City of Sin. 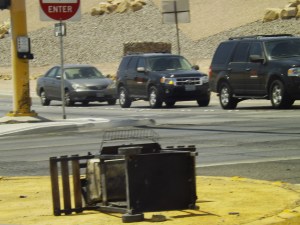