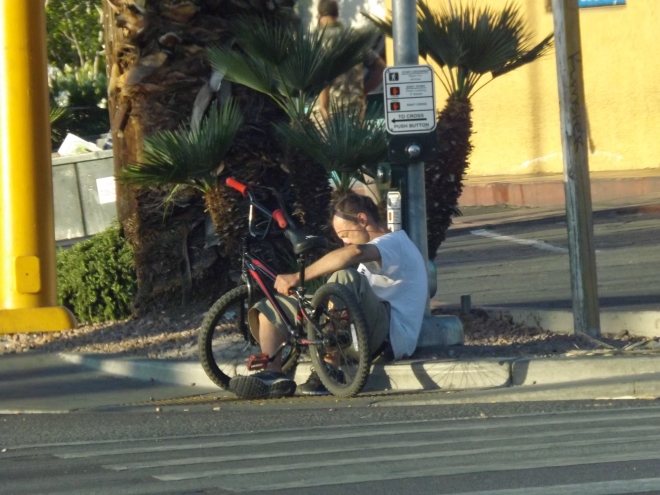 By Royal Hopper
A bearded man holding a sign screams for all he is worth as he stands on the median of a busy Sin City Boulevard pointing at the sign he holds and then at the cars driving past him. Then he screams again and points again and screams again. He is intoxicated crazy and he will not be ignored by people who are on their way to work and other unnecessary things.

Early on another morning in the City of Sin a man stumbles across a suburban crosswalk. He is bleary eyed and uncertain but well dressed and the experienced Sin City eye can tell this man has been wrestling with Mr. jack Daniels most of the long hot desert day and night. He is stumbling back toward his residence perhaps deprived of his keys by an alert bartender or security guard.

He stops in the middle of the crosswalk staring down at the object in his hand uncertain of why it is making noise and traffic on the busy city street stops at that intersection because motorists waiting to turn off the busy road are waiting for him to stop staring at his cell phone and step off the crosswalk. He smiles at the cars and actually attempts to answer his cell phone.

There is a certain kind of entitled decadence in the City of Sin. It is as if some people _ because they are in Las Vegas believe with all their heart it is okay to be a drunken idiot. It is okay to crazy and not care. Its okay. The world will wait while I stand in the middle of road.. Holding a sign and shouting. It will wait while I stumble across an intersection fighting a loosing battle with ethanol babbling on my cell phone ..It will wait. It will.,.. It will wait.

This feeling of entitled decadence seems to cross all lines of wealth and class. It is the seeming motto of the modern day City of Sin. I’m drunk, I’m crazy and I am an asshole (pardon my language but it had to be said) and there is nothing you can do about it.

A Lady and a box _ Royal Hopper

It makes old guys like me and my wife curse under our breath and restrain ourselves from gunning the accelerator as various idiots stumble across the road or walk blissfully out into traffic with a smile on their face or a sign in their hands.. What does it mean ? Not a damn thing man.. It is just life in the City of Sin..

Later still in the week a woman was engaging in the City of Sins latest trend in physical fitness Drunk Jogging . That’s when you are _ you know drunk or stoned .. . . . . . . . An begin jogging down the street for know reason in particular.

She started stumbling down a Sin City back street and then stopped and decided she had to get where she was going in a hurry and ran down the boulevard like a seasoned jogger who had wrestled with Jack Daniels all night and lost. She was obviously not sure of where she was going but seemed sure she would get there faster if she jogged. 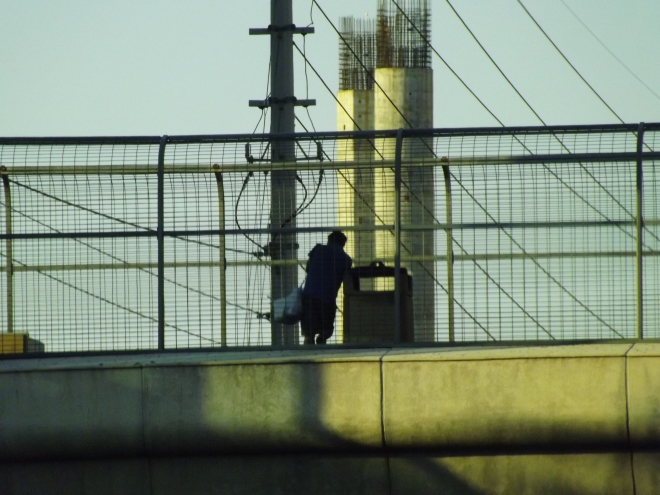