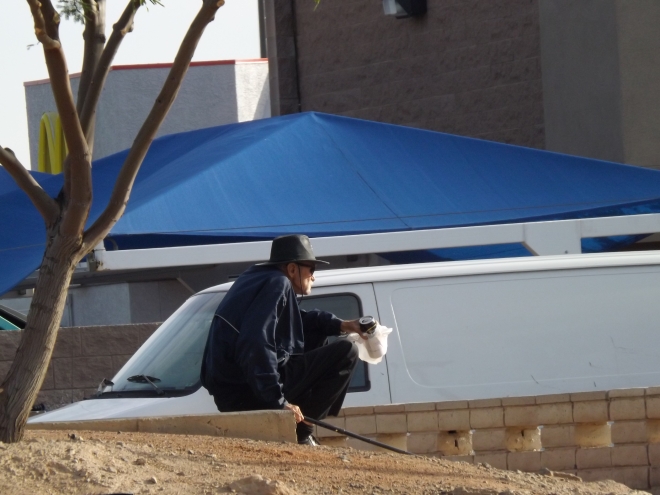 Man enjoys the desert spring time sun. Spring is one of the few times a year the oppressive desert sun is pleasant – Royal

A man pauses for a minute suit case in one hand and mixed drink in the other as he searches for the third thing in the trifecta of things this city can legally “sometimes” legally offer. His black shorts are highlighted by black socks and black sandals.. And a ubiquitous Hawaiian shirt. Las Vegas is built on Gambling alcohol and that thing women in short skirts named Snowbunny can offer. That is not what this man is looking for and not the question that haunts the mind of every Sin City denizen who sees this man stumble toward the smell of something in the distance. What is the question stayed tuned for the answer.

As Somebody once said The City of Sin is obsessed gambling, drinking, the first two of the trifecta the city can legally offer. . . Of course it can also offer cheap or not so cheap hook ups, and illegal substances but those are you know illegal unless the purveyor is sober and gives it away for free The third part of the legal Sin City Trifecta is something we all have at one time or another . . . . It is . . . . . . . . Wait for it . . . . . . . . . Yes Breakfast.. . . . . .

breakfast meats in the desert city named The Meadows by a likely intoxicated Spanish explorer in the early 19th century.

Las Vegans . Both native, residents and frequent visitors . . . Who I refer to as Sinners know all these things. They don’t sweat breakfast. . . .It is every where they worry about other things. They worry if the Cowboys can pull off 10 wins next season or if the Redskins can pull of six because preseason bets have been posted and the odds are okay. They worry if Rory Mcilroy is worth the 3 to 1 odds posted in his chances to win the Wells Fargo classic. They worry about who is going to win this years fight of the century.
What is the question that haunts all Sinners as they wind their way through the day in the City of Sin. 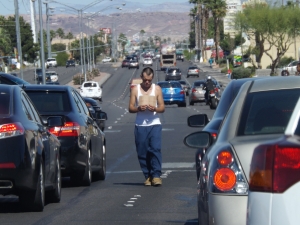 Can someone really look cool in black shorts, black socks and

black sandals with a suitcase in one hand and

a drink in the other..
Are you kidding me

Thats life in the City of Sin