The Perfect Friend in the City of Sin

A woman smiles and turns toward her companion, smiles and pat her on the back as she shovels another dollar bill into the one armed bandit she has been sitting in front of for some time.

The companion returns the smile after a fashion the comedic smirk frozen on its face as the woman shovels another bill into the machine and pats her brightly colored friend on the head and smiles at people who are beginning to star at them.

Her friend is thin and two dimensional. In fact it is as thin as cardboard. It is a cardboard cut out sitting beside the woman who is shoveling bills into the slot machine in front of her, the words gymnast is written across the crayon colored cardboard. I guess the one sure way to make sure your companion doesn’t talk back to you or interrupt you when you are gambling is to make sure they don’t talk or cant talk. Maybe she just wanted to reassure those looking on that she had quality friends and writing gymnast across the cardboard gambler made sure of that.

Still the woman with the crayon colored companion was essentially gentle unlike the man and I use the word regretfully who punched his newly minted wife in the face under the glare of the 100 or so video cameras that populate most casinos in the modern Vegas world. The cops were called of course as is the law in these situations and the man went to jail for a 12 hour vacation as he should have. 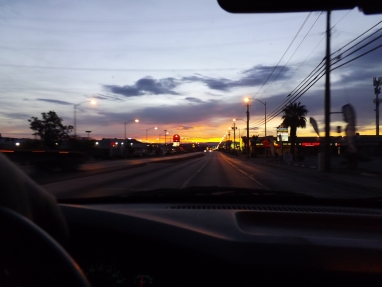 its another tequila sunrise _ Royal Hopper

The woman later claimed that she didn’t remember being hit in the face and asked if the whole thing could just be forgotten.

“I never should have gotten married,” she said. Later she was picked up and carried to her room so intoxicated she could not remember what city she was in and had been laying on top of another intoxicated individual at a bar in the middle of a casino in full view of every one and the world.

There is something about the approach of summer in the City of Sin and consuming large amounts of alcohol that makes people believe they are younger, smarter, prettier and much more interesting than they are. Maybe it’s the sea of neon the hordes of scantily clad women men and otherwise ..maybe it is the reputation or the hype of Sin City but something in the air here makes people believe they are somehow important and can do whatever they please and that in a city full of video surveillance no one will notice. 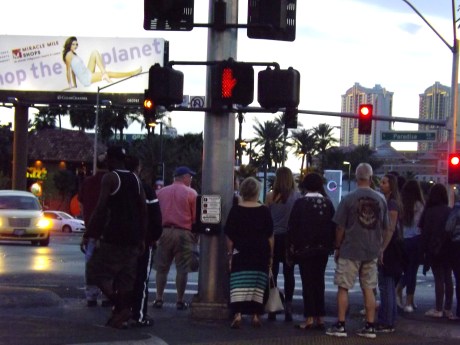 When is this light going to change _ Rpyal Hopper

I imagine that is exactly what the man sitting by a slot machine next to his much older mother was informed that since he was not 21-years of age he would have to leave the casino. His answer .. . . . . “but I am with my mother.”

I think I will try that cardboard thing. If I place a cardboard cut out near me when I am gambling and write Bikini model across it in crayon ..do you think people will buy it.
That’s life in the City of Sin
Take Care Sinners