Hanging out on the Boulevard _ RMHopper

What Were They Thinking

A female figure steps out of an elevator in a Sin City Gambling House looks around to see if anybody notices her and uncomfortably takes not of the people watching her smooth her styled black hair and adjust the strap of her expensive bra and stuffs it beneath her name brand evening gown.

“She/He” wears blue eyeliner, red lipstick and has the one thing no other “woman” in the place can boast of _ five o clock shadow and the need for a reliable razor. She is clearly a he and her nervousness about being seen in all her/his glory is obvious and unneeded. If anybody in the place notices .no one says anything and no one seems to care.

“Oh a transvestite.. .. Hey look the Chargers are ahead by six. “What is for lunch.”

It goes without saying that people in the City of Sin have a thick skin when it comes to being shocked. It takes a lot to get a veteran Sinner to pay attention much less shock their jaded sensibilities. With out city full of dog owners this week

Dressing like giant Anime characters even in the accepted traditions of your own gender will not get you as much attention in this city. Neither will the empathy generating cast Anime Jill wore on her hand especially as the seems to switch hands as you parade around waving to who ever will take notice.

In other places in other more enlightened towns people might be offended or gasp with outrage while others lined up to get an autograph.
People here in Sin City (Sinners for short) will wave back and quietly mutter to themselves black gym shoes and a blue socks with knee length black skirt .. .. what was she thinking.

Every year the city is full of pretty well groomed tourists wearing pretty clothes who think they are hip. They stride down streets roadways and carpet filled hallways of the city of sin certain that their impeccably dressed over groomed asses are certain to attract the attention of every member of the opposite sex.

Their strutting attracts the attention of several “professionals” dressed in black who were soon filling the ears of these “Gucci wearing gentleman” with tales of their meaning the gentlemen’s prowess and good looks. 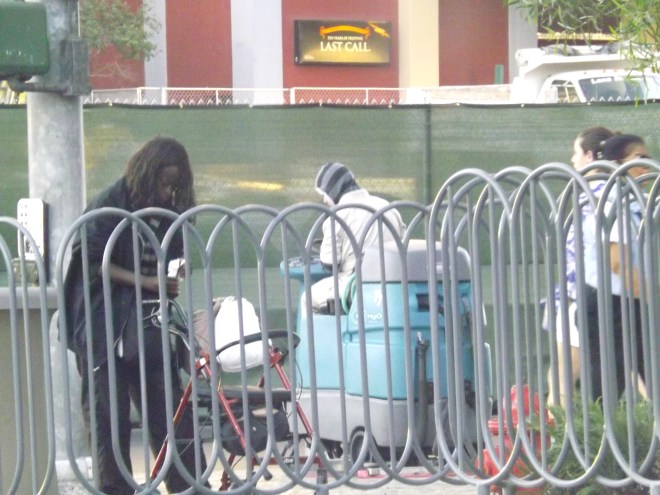 People on the Street _ RMHopper

Lets also talk about disco Dave. The intoxicated and benighted gentleman who stopped in the entrance of one local establishment and broke out in a 70s inspired Dance moves and curled his 70s inspired mustache in a rye grin as the PA above him blasted out musical dance tunes whose copy write had long since expired.
The man danced his heart out with a rye smile until he realized the casino full of inebriated tourists and Sinners who were watching over them were neither clapping their hands in appreciation or laughing at the joke he was trying make.

Disco Dave finally stopped dancing when he realized the only man clapping for him was the drunken homeless guy likely just seconds from being asked to take a walk down the boulevard for the night.

“What was he thinking. I mean really dancing the Seattle hustle to Pearl Jam???” What a dork.”

Here in the City of Sin, colorful characters, good looking rich naiveties cross dressing extroverts well dressed villains and rebellious working girls in Slut rebel commando black are a dime a dozen. Others are outraged or surprised ..Us Sinners just yawn, roll their eyes and go to lunch at the $4.99 breakfast buffet down the street .
Life in the City of Sin brothers and sisters