Your in Las Vegas and you see three Elvi marching down the street one old , one young one holding a woman’s hand  and one fat walking down the sidewalk side by side among a sea of safety vests, hardhat wearing working men marching down a Sin City roadway.

Is it ????
A. The beginning of a  really dirty joke
B. A Village People Reunion tour ….or
C. A new street gang the recruits only white men over 30-years-of-age

The answer is …No
No It’s just Vegas baby It was shift change as a local construction site and three street performers walking to lunch with their wives……It is an every day thing…Thats is how my week ended. here is how it started….

Well you get the idea. This part of the Neon Jungle lights up periodically through the day – Photo by Royal

Stepping back in time and the birth of Disgrungapunckle Rap

When approached by a casino security guard patrolling the outside of that gambling house..a  bedraggled dumpster diving, sidewalk sleeping Sin City denizen  fished a business card out of his ragged much used brown leather wallet.
“This is my badge,” said the man confidently holding up a card likely plucked from the trash he had gotten his last drink from. The man wasn’t dirty …not a street person by any means just really lost in his own world.
Later when engaged in further conversation the man revealed that someone had taken his badge. His badge was a business card with a small portrait photograph hastily placed in the corner of the business card and held in place by the plastic pocket of the wallet it was kept in. The picture had been moved slightly in the process and so now was no longer an LA PD badge just an old business card and one inch tall ID photograph cut from school pictures perhaps……
“Someone stole my badge,” he explained peering over the counter his childlike 5 foot 3 inch frame straining with the effort of remaining calm his face beaming with the genuine belief he was an LA PD undercover on duty in Vegas and he had lost his badge.
“Right on,“ man . If it gets you through the day my man …right on. Just don’t arrest anybody. There is a lot of paperwork involved and you don’t want that messing up your UC operation do you? What does it mean. Not a damn thing…It was just a funny story….

The rain and stepping back in Fashion and Time

The wet weather that plagued the desert in the City of Sin this week didn’t stop the Sin City Denizens from coming out in force…Proving their work ethic is nothing to laugh at the desperate who go through the trash on LVBD were still out in force. One who had gotten ahold of a raincoat somehow ignored both the rain and passersby as he sorted through the days refuse.

I saw a young man wearing a leisure suit for God’s sake….
I could hardly believe my eyes as I stepped out of the smoky processed air of a local casino to breath in the first truly warm air of the new spring. There it was like I was 12 again, It was 1974 and I was posing for a family picture clad in the bright green polyester glory of the lost decade.

Prate Girl looks over her fans – Photo by Royal

This leisure suit guy was not alone. I and witnessed a sea of anachronism s floating across the neon landscape of the City of Sin that day.
Scattered among the pairs of pink running shoes, blue tooth bearing divas,   I saw another with a shaggy unkempt fro and another sporting a Mohawk wearing a Ramones live in concert shirt and another with a Bee Gees Live at Wimberley Stadium T-shirt  ….and yet another  aaaahhhhh…..I mean …aahhhhhhh
A little later and further down the strip I saw I saw a good looking woman with long straight hair and fake rabbit fur coat..over her Nirvana Live T-shirt….and huge puffy hair …..ahhhhh

For a second I truly believed they whoever they are had somehow brought the 70s 80s and 90s together and have brought them together in one huge fashion deprived musical and social movement we can call Disgrungapunkles.

There was a disgrungapunckler standing on a Sin City Street corner sporting a leisure suit jacket, a badly cut Mohawk under a faded Sound Garden CD case hung around his neck like a rap medallion and dirty scared cotton scrawled T-shirt portrait  of Johnny Ramone peering out from under this montage of the decades.

That’s life in the City of Sin
Rock on Sinners 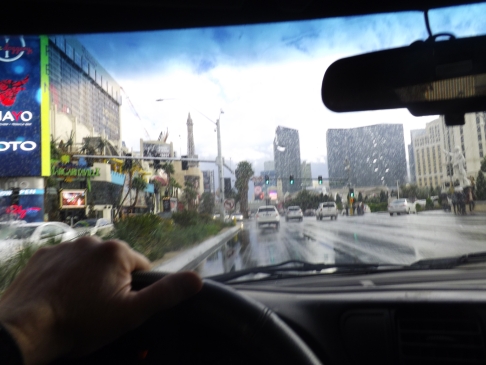