On one street corner near where I live a town full of scraggily nomads sprung up in a matter of weeks.
One week there was an empty stretch of desert there were tents actually camouflaged with dirt sprung up in a little used patch of sand between apartment complexes and the street corner haunted by these nomads.
The colony would have been all but invisible but alas sand is poor concealment in a windswept desert community and you could see the brightly colored red and blue nylon from the tents hidden under the sand and makeshift kaki camouflage. The community was like doomed before it was built…..More later on it’s fate. 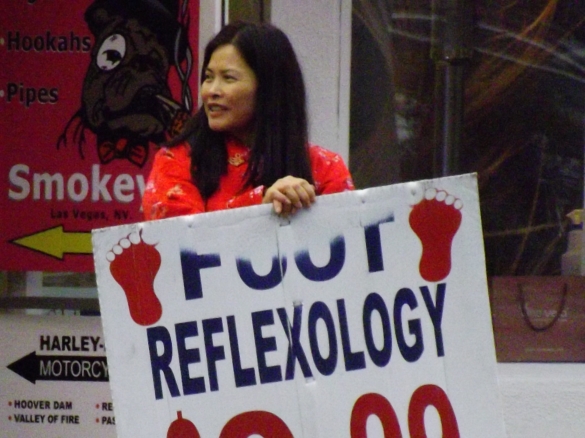 First the Super Bowl came to Las Vegas this week. People from Nebraska flew a thousand miles and more to see a team from a city they have never been too.
‘What team do you like,” I asked one couple who to be disagreeing about the Super Bowl. “You must be a Denver fan,” I said pointing to the one dressed head to toe in Orange.
“We are actually from Dallas,” the couple while admitting to not really caring who won the Super Bowl. They were in Vegas near a big screen television and cheap liquor so they picked sides and pretended to care.
Like Rome of old..Las Vegas is all about the spectacle. We are more civilized now we don’t throw people to the lions or watch them spear each other with bronze pig stickers but the same desire to see bigger than life decadence come to life still exists. Over the top is the rule of the day….
The bigger, the brighter the sillier the better.
Just ask the group of costumed characters seen conversing on Las Vegas Boulevard between hustling tips for posing for pictures. Two half naked show girls stood side by side with an Elvi and two storm troopers, a yellow creature thingy and two of Las Vegas finest. Every performer has their hecklers even street performers and when one Jack Daniels inspired heckler stepped up to fulfill his petty part in life was stopped short by the two uniformed characters. They were apparently real Las Vegas cops and not in the mood to be messed with. 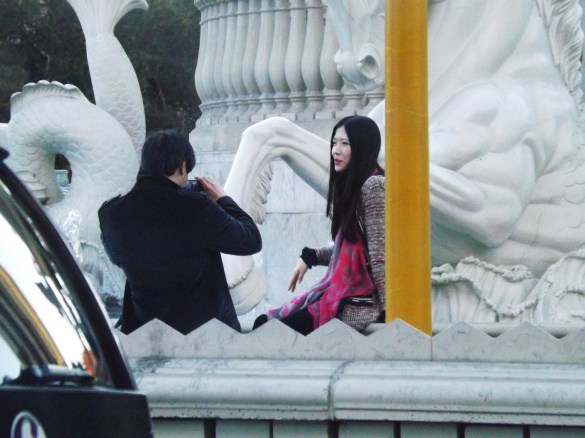 Posing for Pictures on the Boulevard _ Photo by Royal

because it is cool _ Photo by Royal

Every week one or more of the denizens of the motley tent city would show up at nearby businesses, especially the convenience stores. One who I call scruff for his badly trimmed beard that never seems to grow out or get completely cut stood on the same corner with a sign proclaiming he was a Navy veteran and needed help. Another, lets call her Jill for obvious reasons, will walk up to your car and proclaim that her family is about to be kicked out of the apartments behind her and she just needs to borrow your debt card to put the number on the room.
“It wont be charged. I promise,” Jill says with a look of practiced desperation.
Another denizen, a bearded man of my generation born on the cusp between the materialist boomers and Generation X I more dangerous looking. It hard to be fair when strange looking bearded nomad clutching the leash that holds his German Shepherd like a child holds his pacifier. When bearded Gen Xer guy lets call him stares at your 18-year-old daughter as she wanders inside the Circle K to get a soda you squirm a little in your car seat and unconsciously search for a object to hit him with.
There are others, like old Hippie Guy and worn out working girl and scary looking ethnic guy who perhaps to timid or street worn to approach a goateed angry Gen X cusper suburbanite in his SUV. ( The hippies are armed these days I learned from one street veteran who wasn’t so timid.)

If you look you will see these people every where in this town in various state of decay.
One thing that is hard to miss if you really look or happen to have one of those faces everyone wants to talk to is exactly how many people live on the margins these days. Pay attention to the invisible people, like old hippie guy or bearded Gen x guy and listen to what others say about them and you will notice a lot of things even at work.
For instance….
On the average night the average residentially challenged person is sneakier than the average ninja. Like the ninja of myth and legend they spend their time and energy finding places to hide from the winters frosty cold by sleeping in stairwells no one was even sure existed….
They camp out under stairwells on street corners and they build campsites like the one I talked about.
They are everywhere….
Many of the older gambling houses in Las Vegas, those remaining from the Vegas heydays of the 50s, 60s and early 70s, are like huge badly constructed mazes. There are hallways and nooks that no longer have real purpose, doors that lead to offices that haven’t existed since 1975.
If you look you will begin to see some of the same faces time after time after time on the same street corners sometimes with the same clothes waiting for the right time to return to their tent cities or secret sleeping places.

Late this week  the “hidden” tent city disappeared. Not all but many of the usual characters that frequent that corner of the City of Sin were gone scattered to the winds. Perhaps LVPD finally caught up with the tent cities and told them to camp somewhere else, perhaps the properties owners hired security guards to run them off …perhaps they simply moved on the greener pastures …..perhaps but whatever……

Such is life in the City of Sin