In news paper parlance we would call this wild art. It is just a cool picture of a man riding his bike down the boulevard Saturday waiting for the moment no one is looking to take something out of it _ Photo by Royal Hopper..P.S. if a newspaper here hires me I
promise to come up with more clever cut lines and put the focus bar on his nose as
prescribed

Dog shows, demographics and conversations in the City of Sin

A snapshot of a street corner by a fast food restaurant in Las Vegas. It is mid morning and the usual suspects are sitting on the ground. Two are four legged, one is slumped over and another stares at the morning sun. Standby to hear more about this epic.

Question: What do you call it when hundreds of Las Vegas convention guests urinate and defecate on the grass in broad daylight and without shame while others named Mac, Prince, and Red Furnace strut across the convention center floor waiting on the commands of their boss and sniffing other conventioneers hairy buts.
Well you could call it an S and M fetish convention, a meeting of Panderers local 459 or a really bad day at the adult book store but most of the people at the convention called it a dog show.
It is amazing the parts of conversation you hear in Sin City locals and this week was no exception.
One convention guest was speaking to another and said something to the effect of ….“and then he showed his bitch…” In this case bitch literally meant a female dog which is what of course it literally means and bitch is a word you often hear one dog owner say to another because that is what bitch means… a female dog.

Earlier this week fire destroyed an abandoned Casino called the Key Largo at the
corner of Flamingo Road and Paradise Road. This photo taken Friday shows fire crews still spraying hotspots in the old building in preparation for a search of the building. Local news said this week that investigators searched for the bodies of homeless people that may have been living in the old casino but found none_
Photo by Royal Hopper

Another conversational tidbit went something like. “Maybe he can go back where he came from…” There was no one around these two people at the time so maybe they were talking to their imaginary friends walking nearby.

Another conversation tail end went something like this….”If that was the reason why ..but it could be an issue of character…
What do you say to a person who talks about character as he is standing in line at a Las Vegas ATM getting more money _ perhaps to gamble, drink or otherwise indulge himself in decadent activities…or perhaps he came to Las Vegas to get money for his sick mother….or for his church . ,…..yeah that it.
Do you call him self righteous, do you call him a hypocrite?? Do you call him a congressman?  Or do you just call Jim the annoying tattooed black shirt wearing guy wearing a shirt with Christian logos strutting through a Vegas casino with his smarter than he is girlfriend trying to convince him not to be an organ with little obvious success. 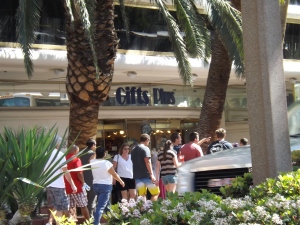 That one corner of a Sin City Boulevard was a portrait of the City itself a demographic frozen in time and space (I was recently replaying an old copy of the Rocky Horror Sound Track and line from the closing song stuck in my mind)
One man sits by a side door perhaps seeking protection from the morning wind or perhaps he had no where else to go. An older middle class lady sits with two dogs on the lawn feeding them breakfast and waiting for her morning coffee fetcher to return from his errand.
Nearby two Sin City Boulevard regulars sit in front of a construction site one bobbing his head to the rhythms of an unseen band the other slouching against an orange construction barrier catching a few zzzs in between asking for cash and Mickie Ds left overs. The man with the white beard stands in his usual spot handout as always a diligent panhandler with  the work ethic of a businessman.
Later the dog owners get up and return to the dog show, the others grown weary of trolling for leftovers and move on to other corners while the man with the white beard stands with his hand still out as a man with an expensive camera and custom leather shoes struggles to get his holiday pics just right snapping badly framed photos of the same clowns, clouds and neon as the millions before him and the millions yet to come.

“The Strip” at night _ Photo me

A working girl winks at businessman, a couple holds hands and man riding a custom motorcycle thunders down the road past a double decker tourist bus and probably realizes he is in the wrong city for anyone to care.

Such is Life in the City of Sin

Rock on fellow Sinners
and watch where you walk