Thor the God of Thunder___Photo by Royal

I don’t know if any of you have ever seen a man in his mid 50s dressed like GI Joe carrying a Captain America shield or a 5 foot 4 inch Thor with a bleached blonde beard but in the City of Sin It is not an uncommon experience. We see such characters on street corner’s along with assorted Elvi and a lifesized talking statue waiting for the 4 p.m. bus. This week comic book fans converged on the City of Siin attired in assorted get ups as homage to their favorite hero, heroine or villain. Of fourse I doubt Thor ever waited in line at the ATM for gambling money and Batman probably didnt spend a lot of time arguing with his sister but there it is.

It goes without saying that in a City where people in costumes can be seen on any downtown street corner you have to go along way to get noticed and these folks did. There was the usual stuff of course. One man fell down a flight of stairs backwards after trying to start a fight and another foamed at the mouth and collapsed to the ground after the Herculean effort of getting into an elevator was to much for him.

All in all it was a pretty ordinary week in the City if Sin so in an effort to get back into practice and perhaps dig a few of my old clips out of the dusty breifcase I stored them in and put together a resumes to mail out to local newspapers I wrote the follwing like a weekend feature for the small town newspaper I used tio work for. Im not really a page designer so bear with the junior high layout. Wendy where are you when I need you. Such is life in the City of Sin. Later 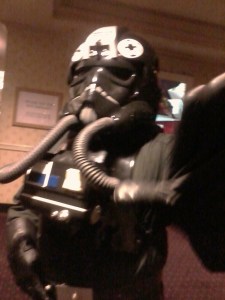 Comic Expo Brings Superheroes to Life in the City of Sin

In Imperial Fighter Pilot Dan Johnson’s everyday job he is a diver, a professional with a real life. He spent most of Saturday as a proud member of the 501st Imperial Stormtrooper Legion ( http://www.neoncitygarrison.com/ ) keeping order among the crowd of rowdy comic book fanatics at Saturday’s Comic Expo in the City of Sin on Las Vegas Boulevard.
“We hope to make this a regular thing,” Johnson said about the convention briefly taking off his imperial fighter pilots helmet to take a breather and say hi to Harley Quinn the evil DC Comic villain side kick fond of hitting victims with a large hammer similar to the one many of this weekend’s convention carried as a plastic prop.

Lines formed early at the convention site with convention goers who came in costume getting a free cut in line prior to opening of the gate. A portly Green Lantern, artificial six pack and all, waited patiently next to more ordinary people with spiky black dyed 80s style hairdos that are apparently making a huge comeback and a midget pair of Batman and Robin imitators.

“I see the Black Widow Mama,” said one excited young female comic fan as she clutched her mothers hand and watched a magenta haired black leather clad convention goer saunter by.
Prices for the books carefully displayed in the booths across the convention floor ranged from a modest $3 to several hundreds to well into the four figure range for the truly rare and demanded comic books. As Michigan based comic peddlers for the Harley Lee Rare Comics company said business has been good this year. People are buying comic books and not just the classics like Wolverine and Batman. Ursa Minor a hammer bearing female werebear was one of the characters featured in comics at Saturday’s event and a host of sexily drawn female superheroes and a host of others dating back to the early 40s also graced the pulp fiction novelettes.

Back outside the convention center other members of the 501st Stormtrooper Legion adjusted their gear and prepared to hold off an attack by rebel scum masquerading as ordinary comic books fans.
Nearby a Goddess of mischief traded gossip with a toxin spewing, plant loving personality called Poison Ivy, Wonder Woman and the Green Lantern lounged against a walled barricade down the hallway and storm troopers continued to pose for admirers outside what posed for a death star in the City of Sin ancient carpet an al.

Was it all a hallucination inspired by bad whiskey, a birthday party for George Lucas …an audition for dancers at the Copa Cabana. Wrong on all three counts.
The Collectors Society web site officially announced it as a revival of a comic book based convention in Las Vegas. It was the first of hopefully many Comic Expos to come.