Blessings and Prayers for the family of singing great Whitney Houston in their time of grief. A great singing talent by some accounts one of the greatest, has left the surly confines of this earth far to soon.

This week there was a rare desert rain shower and even rarer rainbow against the backdrop of distant mountains and the foreground of the Las Vegas cityscape.
There was beauty, and silliness like the man spotted standing in the road with a sign and what I think was a rounded cap of some sort holding a sign and making small bows and staring at the oncoming traffic daring them to run into him or perhaps praying that they would.
Sometimes, however you hear of things in this city that cannot be called beautiful or silly. You hear about things there is no other way to describe but sad and sadly intrinsic to the human condition in any city.
Imagine sitting and drinking or laying and drinking in one place for so many years you couldn’t find your bed when you stood up _ for all the castaway empties surrounding you and your favorite drinking spot.
This week I heard from a friend about the death of a local woman and what investigators found when they arrived to catalogue the contents of her house and I saw the pictures.
Investigators report, and have photos to back it up, that they found a huge pile of discarded wine and/or champagne bottles stacked three feet high and at least a dozen feet wide in the bedroom of a Clark County resident.
. The woman’s bed was completely covered as was most of the bedroom the bottles lay where they had been drained and discarded for quite sometime.
In other rooms more champagne and wine bottles were stacked in neat rows standing up neatly in long lines like Soldiers or Marines in formation. Dozens maybe hundreds by count. In the kitchen empty cat food cans were piled up in such numbers that investigators had to use shovels to clear them away from the counters.
The woman had died in bed surrounded by discarded champagne bottles and cat food cans.
We all have our demons and our virtues
As I have often said the city of Sin does not often create the dysfunction I write about but it does seem to put it on display more effectively than most adult Disney Lands. 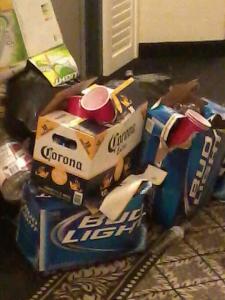 The refuse from a single night of excess

On one morning commute I spied an older couple who was standing in the middle of a busy median trying to find a way across the street, perhaps not understanding what it means to cross a street in the City of Sin with no cross walk or street light to help you along.
This city can be a wonderful thing with its wonderful apathy that allows the eccentric and the desperate to be their most colorful or desperate and fun seeking selves, but it is also a “demon” friendly place and if you let it and sometimes if you don’t it will eat you alive.

And now for the lighter side of the news….

It is a shocking thing when Las Vegas area hotels first open their swimming pools for the preseason sun bathing crowd and trust me it is an ugly sight.
The first tentative sunbathers that tested the gentle warmth of the February Nevada sun were how shall we say it …not tan. Now I’m a pretty fair skinned guy and pretty furry too but when you nearly blind several people in the vicinity when you take off your robe to sit on the lounge chair maybe you should keep it on.
When one glow in the dark soccer mom sat down bare legged on the sun chair provided by the hotel I screamed and grabbed my eyes and shouted ohh the pain.

The music improved this week with a sampling of 80s and more modern music creeping into the hot mix of 70s disco. Fleetwood Mac and Diamond Dave and the Van Halen crew and host of Weird Al Yankovic satirical imitation. “Eat it ..eat it ..eat it “  I actually found myself unconsciously dancing to tunes I listened to in High School.
Perhaps in keeping with the updated music I saw another casino patron that time forgot. He was dressed in the perfect Punker get up.

Think a Clash reunion complete with the hair sprayed punk pompadour, off green leather vest with the raised collar and Dock Martins in dark blue. He and the tall willowly ash blonde woman with him with the waist length Cher style 70s hairdo looked lost in what I call the Old Days Daze perhaps remembering the time when the salt and pepper pompadour he wore was raven black and her long straight hair was the height of counter culture fashion.

Such is life the the City of Sin